Below is a marvellous journey of a Tele build, sent to us recently by one of or clients. The build looks awesome and we’ve been drooling over it since seeing the pictures:

“It’s a Thinline Telecaster, built in a shed”

To have a unique guitar, personal just to me, features I want and nothing more. I always loved the look of a mark 2 Thinline, but wanted Gretch style TV Jones pickups like a Cabronita. I had a Squire Strat neck I really liked and I like Strat style tremolo bridge. Also I wanted a bound body and it had to be blue. 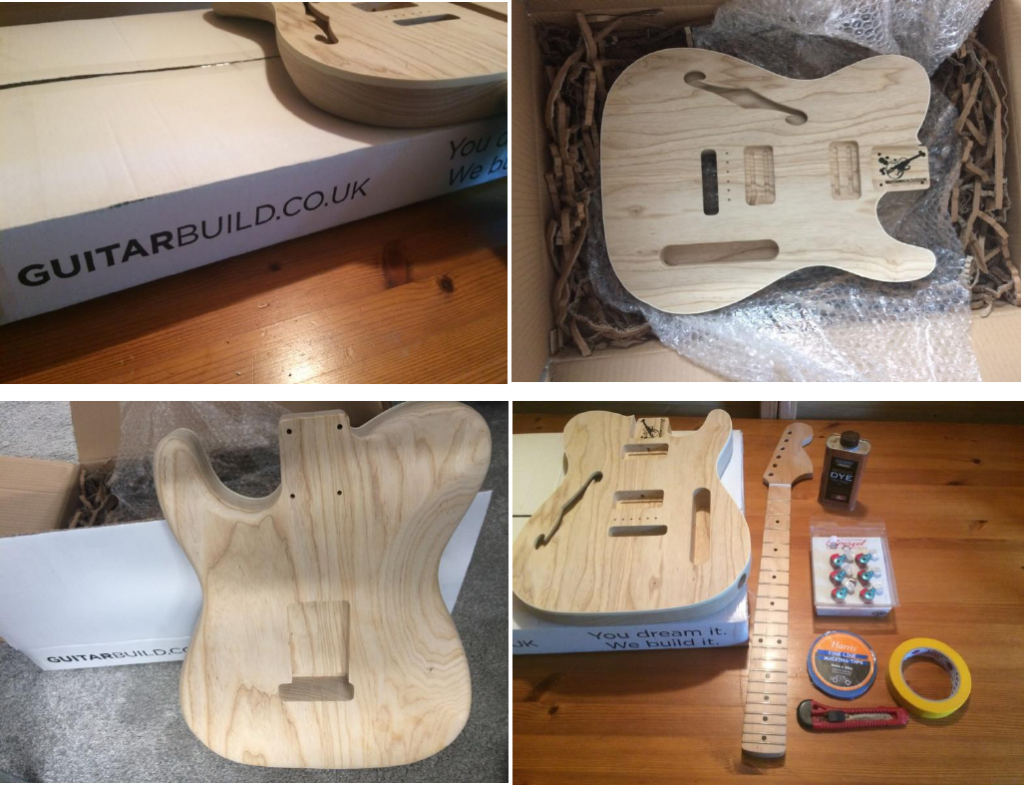 The finish on the body was superb, many guitar build books say use grain filler or when you stain or paint the wood the colour will be absorbed unevenly. I liked the sound of making the grain more of a feature so decided to take a chance and see how it turned out without filler, my thinking was if it did not turn out well I could sand it back then fill the grain. In the event I like the prominent grain finish. Colour wise, I always liked the Pelham blue Gibson’s so wanted similar in metallic, I also think that a guitar with binding should have a front colour and a wood finish to the sides and back.

I used wood dye which I would clear coat later, I initially looked for a rosewood or cherry dye but preferred the colour shown on a tin of Colron Deep Mahogany wood dye. First I had to make a handle screwed to the neck socket, I then masked up the binding. 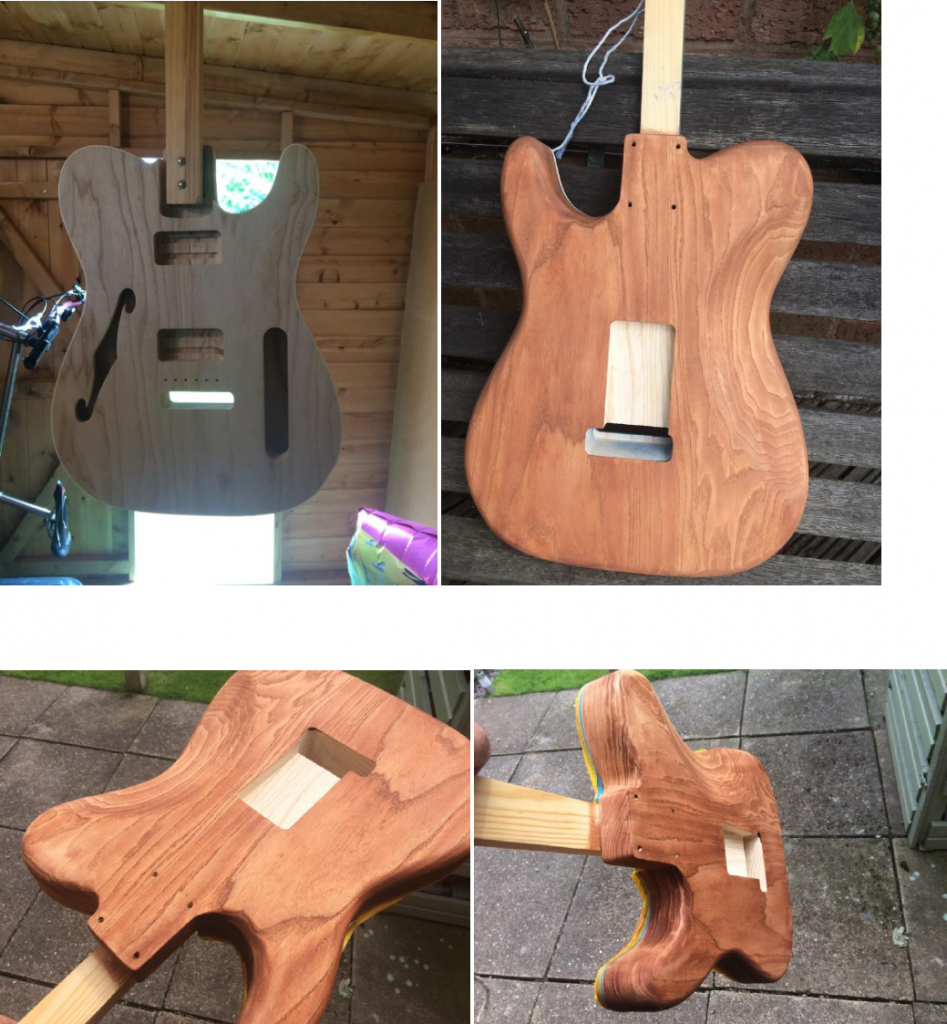 Handle attached in the neck socket, loop of string to hang it to dry, I applied the dye with a soft cloth, it went on easy and I was happy with the colour after one coat. The grain was really enhanced with the dye, I just hoped the clear coats would give it a nice shine. I then masked up the back of the body ready for the blue metallic paint.

I gave the front of the body about 8 light coats of blue (Ford Vision Blue Metallic), then T cut it back before about 10 coats of lacquer. After 24 hours for the lacquer to harden off I used more T cut to get the smoothness I wanted then used furniture polish to get the subtle shine. Next I fitted the neck, the neck socket in the body was a perfect fit for the squire neck, it held in place without screws well enough for me to check alignment which was bang on. I bought a new neck plate from Charlie “unionbase” on ebay, I liked the custom design, it also fitted the hole centres perfectly. The body had the four neck holes pre drilled and everything lined up first time. I intended to use a G clamp to hold it all together but there was no need, the neck fitted tight and the screws just pulled it all together perfect first time. 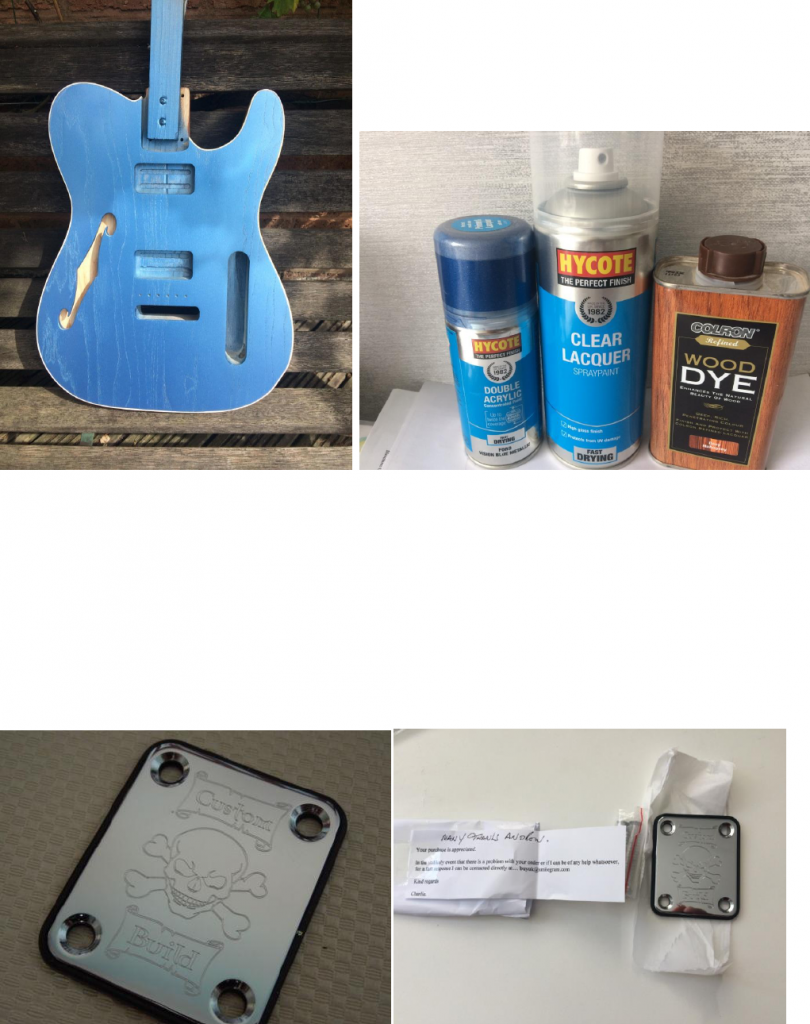 I knew I wanted TV Jones pickups, but I also know I needed advice on pots and caps to get the best out of them, so just buying them from a large German retailer was not going to be enough. Luckily I found Retroville guitars, they sell TV Jones pick ups and Steve Baker their MD took a keen interest in my project. His advice was, “For pots, for humbuckers (Classics) you’d want 500k and for single coils 250k as a rule. TV Jones recommend 0.22pf caps as standard, however there are lots of variations, especially with Cabronitas as some use S1 switching with a push pull volume pot switching tone. Its also worth researching the Greasebucket mod as that is popular.”

Pickups arrived well packed and in quick time, plus free TV Jones stickers. With regards to Steve’s advice regarding controls, I found Northwest Guitars (northwestguitars.co.uk) they would build a control plate to my spec, it’s a painless process and four days later the plate arrived, it looked good quality, with nice thick chrome on the plate and the knurled knobs, good action on the switch and decent looking soldering.

First I fitted the Fender traditional tremolo bridge the pilot holes in the body were bang on perfect although I did drill them a bit deeper with a small drill bit and set the depth almost the length of the screw. Fitting the pickups I was worried that the wire would get pinched so I routed a slot for the cable with a dremel, not as neat as I would have liked I think a slower speed would have given me more control. 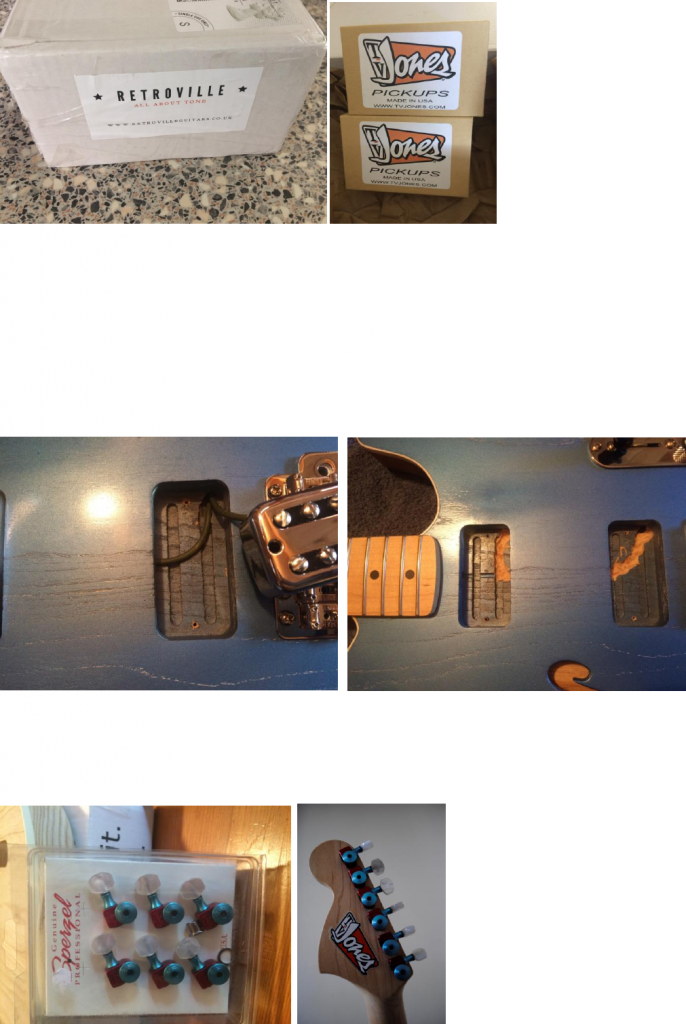 Clash of wires was an issue for me, although the pickups come with rubber foam pads to protect the cables, I routed. With the routing done I fed the cables into the slots and covered them with the foam pad and screwed them home. Instructions from both North West Guitars and Retroville Guitars were very clear and soldering took a few minutes.

I had found some flash looking Sperzel locking tuners on “Junctionmusic1” red blue and pearl, a must have!

Socket fitting flange came from Partscaster on ebay, I used the socket already fitted on the control plate. The headstock decal was custom made by Bobs_decals on ebay, great service from Bob. The last job was the pick guard and back plate, these came from earlpilanz on ebay, I started with a standard Cabronita plate knowing I would have to cut it down. I made a few templates in card first, and settled on a simple rounding off.

Ivory pearl scratch plate, and cut down version, I used a dremel with routing bit on the slowest speed, I clamped the dremel in a vice and held the plate and did the rest by eye.

Set up took a while, and I revisited it a few times until I was happy, action was good straight away no need to touch the truss rod, intonation however took a bit longer. Only after I was happy with playability of the guitar did I fit the tremolo arm which is reshaped and cut down first.

I am very pleased with the guitar, it is light but feels solid, I love the colour and it has a sound all of its own, on a clean channel it has sound thicker than a telecaster but not like PAF’s, on an overdrive channel it growls, the range of sounds is amazing, I am still getting used to it but each time I play it I find a new sound in its range.

I had a great time building the guitar and would like to thank:

Below are a few photos of the finished guitar: 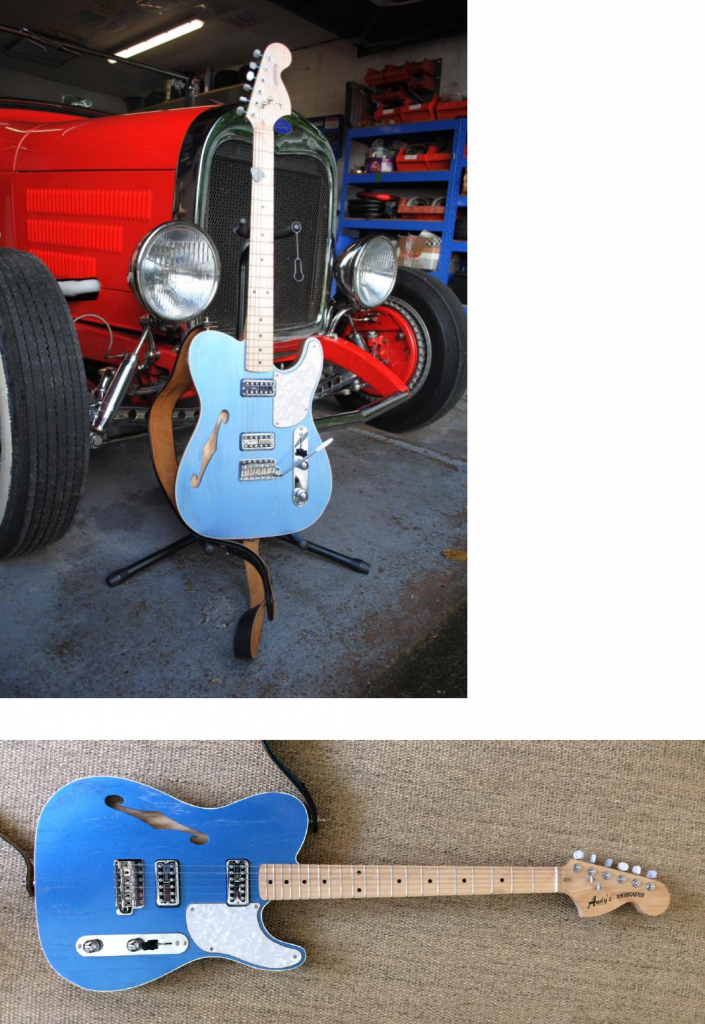 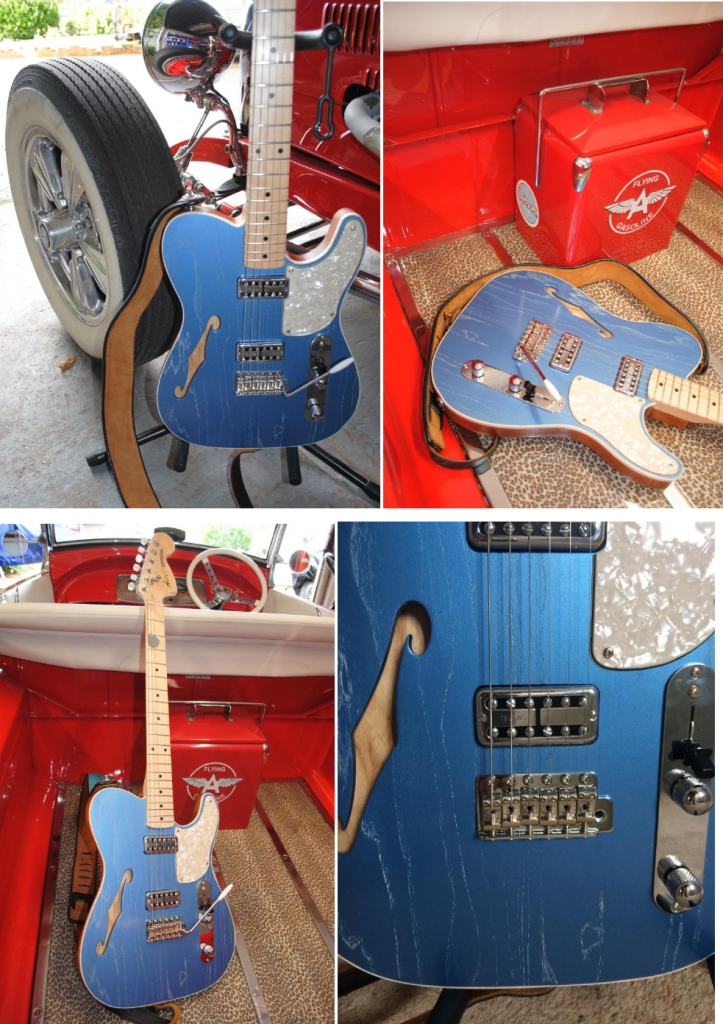 About the Author: Steven Baker

COVID-19 - have decamped to home office and shipping within UK Gov advice. Deliveries may take 1 -2 days longer. Please contact us for more.

Be Blown Away or Be Refunded

We are the only retailer to offer an exclusive love it or return it money back guarantee on TV Jones pickups. Fit them, gig them, sweat over them – give them a proper road test and if you’re not happy, return them to us within 30 days for an exchange or refund (minus 10% re stocking fee).  We’re musicians ourselves and appreciate that trawling the forums, listening to sound samples or YouTube clips on your headphones is of no guarantee that your purchase is going to cut it when you try it. Find out more …

We use cookies to ensure that we give you the best experience on our website. If you continue to use this site we will assume that you are happy with it.OkRead more